The cowboy boot is a classic American icon

Back in the days when cowboys still galloped through the tallgrass and the sagebush no one could imagine that one day not the whole world would be in love with what they wore on their feet. It is a love affair with the beauty and sensuality of the cowboy boot that has become an emblem of a style that is at once a pose and the consequence of a great adventure.

The protagonist of that adventure emerged as a distinctive American type in the middle of the nineteenth century. His precursors were mountain men, planters, cavalrymen, but he was influenced most of all by the Mexican vaquero. Before 1870, American cowboys wore most often cavalry boots with low, flat heels, square toes, and high tops. Following the Civil War by the late 1870s, the distinctive cowboy boot had been added to the cowboy outfit. It is impossible to say which bootmakers (many of them of German ancestry) invented it, but in any case the style became popular very quickly. The boot was a sort of northern European riding boot, close-fitting and high-topped, modified to accommodate the needs of the American cowboys.

Cowboy boots rose to a fashion high with the entertainment industry’s success with the cowboy hero. The 1920s and 1930s West was kept alive through shows and movie serials and its heroes like Roy Rogers, Dale Evans and Gene Autry. With these Hollywood idols the Western style and the cowboy boot became a truly American fashion statement. During the next twenty years cowboy boot designs became increasingly intricate and colorful. Spider webs, cactus, pears, eagles, horses, horse shoes, bucking broncs, oil derricks and endless varieties of butterflies, eagles, flowers, and vines all but replaced the simpler inlaid boots and reflected the kitsch glamour of the films of the period.

In the early Sixties boots became more sober. The inlaid patterns and symbols in boot tops were pretty much discarded in favor of a solid-color boot made from an exotic skin. The most common cowboy boot in the Sixties and Seventies was essentially a conservative businessman’s boot – not too tall, not too short, with a low walking heel – worn with a suit.

Cowboy boots enjoyed a later resurgence in world wide popularity following the 1980 release of “Urban Cowboy” starring John Travolta. Today it is understood that Western boots are above hype and trends, something that fits into the concept of fashion and style and has become a classic in its own right.

Stallion embraces the rich history of cowboy boot making and takes on vintage boot designs, superimposing a contemporary idea on that design, and making a new and improved classic. 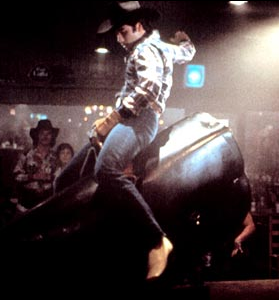